I’ve done a review of the Zoom 750 recently, which is a handheld torch marketed towards mechanics and technician in lieu of backpackers and such. But what if you don’t really need all that 750 lumens of luminosity? In most cases, half of that lighting capability will be ample. Don’t fret, because Ring Automotive has you covered on that front too: Cue the smaller brother, the Ring Automotive Zoom 300 Inspection Torch.

The unboxing experience is largely identical to the Zoom 750’s. You get the unit itself withan USB to microUSB cable packed in, because like its bigger brother, this has an integrated li-ion battery inside.

Undoubtedly the biggest discrepancy between the Zoom 750 and this Zoom 300 though is in the dimensions. The Zoom 300 is a much smaller overall package when compared to the Zoom 750, which may prove to be a trait more valuable than sheer brightness. Otherwise, it’s very similar. You get the same excellent black anodised brushed aluminium body that feels hefty and well-built. If anything, it should be more rigid due to the smaller size. There’s the knurled part at the middle for grip, the Ring Automotive logo at the front and a blue ring surrounding the business end of the flashlight.

To achieve smaller packaging, the battery packed inside is a smaller one as well. It is rated at 4.5 hours at max power mode (300 lumens), and 10 hours at max life mode (150 lumens). It should still be able to last the duration of its purpose though.

Immediately though, this feels a lot more pragmatic as a runaround torch. I can actually fit it relatively well inside my pockets, it’s a lot easier to carry around compared to the lofty Zoom 750.

While it is not a big torch, you may be surprised at how heavy it feels. This little guy boasts a very well-sorted build from handling it, as it should be. It’ll survive the typical workshop abuse. You switch it on via the blue button on the rear of the torch, and it’s definitely a little dimmer than the Zoom 750. That said, I never found that to be much of an issue, since it was still plenty enough to light up the belly underneath the engine bay. You can still spot leaks and check for wear with the Zoom 300, infact it is still incredibly bright for some jobs. There’s another reason to pick the Zoom 300 over the Zoom 750, the fact that it’s magnetic at the button end of the torch. This means that you can just stick it onto most parts of a car and have both hands free for work. This is a big selling point for many out there.

Akin to the Zoom 750, this flashlight can serve as a power bank in an emergency. It has half the battery reserve of the Zoom 750 at 2200mAh. There’s also IC protection built in to protect against overcharging and over-discharging.

After the test, I can definitely still see the appeal of the bigger battery and additional illumination that the Zoom 750 offers that’ll definitely suit a workshop more. So, the decision here is whether if the tinier Zoom 300 is worth the tradeoff in battery life and performance compared to the Zoom 750? 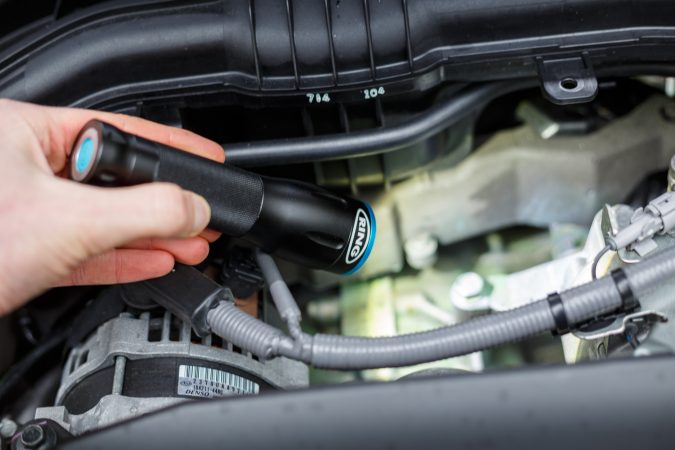 In my usage, it’s a solid positive. I find the Zoom 300 to be the more logical option here, just because of its handy size and that magnetic back, so that’d be my choice and recommendation for hobbyist mechanics out there. If want the brightest light available, take a look at the Ring Automotive Zoom 750 Inspection Torch.